Our Friends in the North (of Europe!)

The Association is, of course, predominantly comprised of members working in the National Health Service and for Local Authorities in the UK. We very much welcome new members from outside of the UK as well, and Conference in particular is attracting an increased number of APTs from Scandinavia.

Eli-Mathea Skaare was a recent delegate at Conference 2013 and subsequently joined as an Affiliate member. 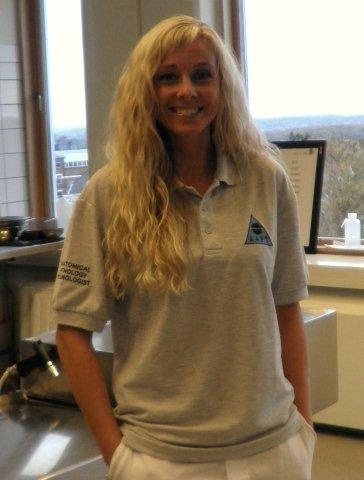 Eli spoke of attending the AAPT conference in Luton, why she joined AAPT and a bit about the role of APTs in Norway:

“I heard about the AAPT conference through my Scandinavian colleagues and the program for the conference seemed very interesting. As we don’t yet have any formal education in Norway our best way of keeping ourselves updated in our profession is attending courses and conferences.

The conference in Luton was very well organized, with a good trade exhibition and instructive and inspiring lectures! In addition to the teaching prospect it was so nice meeting colleagues from overseas and to learn how APTs organize their work in the UK.

I have been working in the Department of Pathology since 1995, and have been an autopsy technician since 1997. Although I have been a technician for nearly seventeen years I still find my job most engaging and exciting! Besides doing post mortems I also do laboratory work with paraffin embedding and making slides of all the material from the PMs, and I write the PM reports. Attending to the bereaved and placing the deceased in their coffin is also part of my job.

I was on the board of APTs Norwegian sister organization, NMT, for 6 years, and I am still involved in the work of establishing a formal education system for technicians in Norway. If things go as planned, we will have a certification system in place by 2014, which will be the first step to a formalized education.

Before attending the conference in Luton I read about AAPT and learned that your organization has a well designed education/training system for APTs in the UK. I find it most important to maintain a high standard of the work performed by APTs, and by being a member of AAPT I have access to the web forum for technical and professional discussion, CPD and on-line learning, which can provide me information that can be useful in my daily work.

There is a big geographical distance between us, but we all have the same special profession.  I will strongly encourage all of my colleagues here in Scandinavia to become members of AAPT, as I believe we have so much to learn from each other.

A warm thank you to all our colleagues overseas for the social gatherings throughout the conference and especially to the AAPT who invited us to your great arrangement. I hope as many as possible of our Scandinavian colleagues are able to attend to your next AAPT conference, as I am confident it will be another big success, both academically and socially!”