From Spiders to Sperms Whales - PMs across 10 orders of magnitude

On what had to be one of the most eagerly anticipated Friday nights since lockdown began, Dr Simon Spiro delivered a fascinating insight into the world of animal pathology 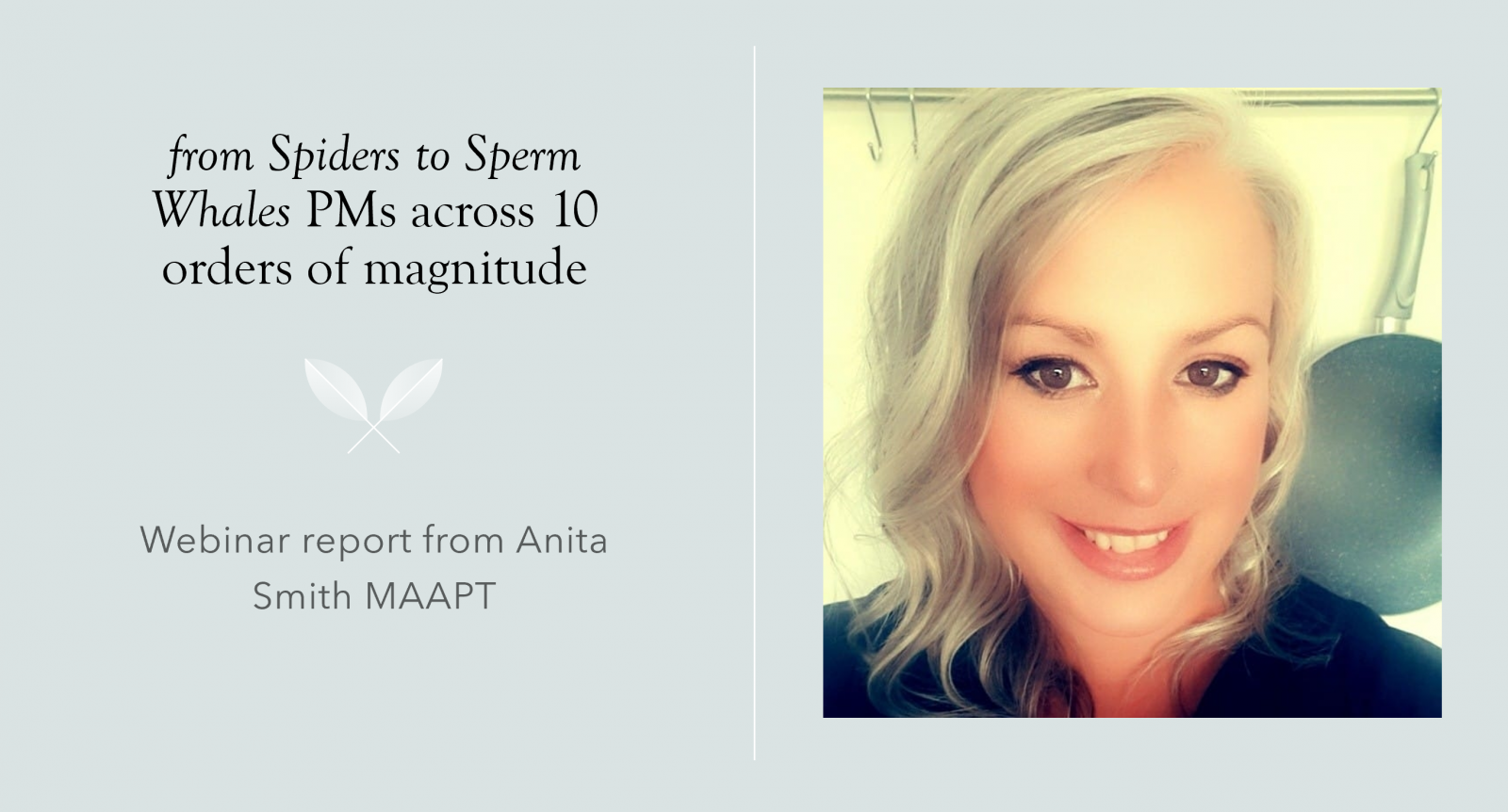 Titled ‘from Spiders to Sperms Whales- PMs across 10 orders of magnitude’, he delivered a glimpse into his fascinating life as anatomical pathologist at the Zoological Society London, which includes London Zoo and Whipsnade Zoo. With a combined collection of 25,000 animals from megafauna such as Elephants and Rhinos, down to tiny invertebrates, his role is to perform post mortems on each and every animal that dies.

Dr Spiro has an impressive CV including having a Veterinary Medicine and pathology degree from the University of Cambridge and a PhD in Virology from Oxford University. He is also a Fellow of the Royal College of Pathology and Diplomat of the American College of Veterinary Pathology. He has also recently been employed with the UK Cetacean Stranding Investigation Programme (CSIP). This latest employment involves attending stranded Sharks, Whales and Dolphins and determining their cause of death. Being able to perform a post mortem on something as large as a whale down to a tiny insect must make his work incredibly challenging and fascinating.

So why does every animal that dies across Zoos require a post mortem?

The main reason as he explained is due to legislation. The Zoo Licensing Act 1981 instructs that post mortem examinations must take place once an animal dies. Surprisingly most Zoos do not employ an anatomical pathologist so these examinations are often performed by veterinary staff or in some cases the keepers themselves.

Dr Spiro explained that the main purpose is as a diagnostic tool which can help to ensure the health of the animal populations, especially as many of these animals are too dangerous to examine up close routinely. Other reasons include, but are not limited to, research, education and conservation. As he is not governed by the HTA he is able to keep samples from every animal that has died and archive them. There are currently over 40 years worth of animal samples in storage.

Both ZSL and Whipsnade are lucky enough to have on-site post-mortem rooms which can accommodate a generous sized animal.

The post mortems take place very quickly after death, often while the animal is still warm due to them being unable to store large animals and the smaller ectotherms (invertebrates, fish, reptiles and amphibians) will rot within hours even if kept chilled (all of their enzymes and bacteria are already optimized to work at low temperatures).

Dr Spiro had a sped-up video of the post mortem process on an African Lion. She was euthanized at 20 years old due to old age and arthritis. This is a significant age for a captive lion to live as in the wild they only average 15 years.

There is a huge responsibility on the veterinary staff and keepers to ensure that the animals are kept in the best health but also that they do not become debilitated by conditions such as arthritis as this can make them a target in their pride as well as not allowing them to suffer needlessly.

The first step to this process is to remove the hind and forelimbs which over hang the animal so that the organs can be exposed. With no open casket to be considered there is no need for Dr Spiro to reconstruct. With these limbs removed the animal is next skinned and the pluck (tongue, larynx, trachea, oesophagus, heart and lungs) is dropped, in the same way these would be on a human, and the muscles, bones and joints are examined. In this African lion Dr Spiro was able to see evidence of arthritis in the limbs.

Next the abdomen is exposed and the ribs are examined and removed. In some cases, the skeleton of the animal is to be donated and so care has to be taken not to damage the ribs, they are stripped and then articulated out of the way.

Once the ribs have been removed the organs are removed individually and examined for any gross pathology. With no reconstruction to consider the post mortem is finished and the animal is sent for cremation unless other arrangements have been made, donation for example.

So what happens with smaller animals?

Dr Spiro gave an anecdotal account of a post mortem he performed on a highly venomous viper. It was fascinating to discover that heat receptors in a deceased snake are still able to function after death meaning there is a chance of being bitten. The post mortem on these animals consists of taking hold of one end of the organs and peeling them away from the body cavity.

The organs are then laid out in a single line. Most snakes have only one functioning lung and a long digestive tract. Did you also know their scrotum is internal as being cold blooded there is no need for them to keep the sperm cold? He also discussed how very small animals such as spiders and tiny fish are set into a slide and examined under the microscope.

This is the only way that these tiny creatures can be examined as their size would not allow for any gross pathology to be seen. Did you know that a fish’s heart and kidneys are in its head? In these micro examinations Dr Spiro is able to see any pathology including lymphoma, which was what was found on the fish post mortem he showed us.

What kind of things can be found at post mortem?

Common findings in penguins is Aspergillosis which is an opportunistic fungal infection that can cause pneumonia. It is the biggest killer in captive penguins with Malaria coming in second place.

Dr Spiro then showed us a photo of a deer who was died in labour. The fawn was breech position and coming out bum first so the labour would sadly never have progressed.

Other fascinating things that can be found at PM is in the case of scorpions. They can be pregnant for 6 years! It is not uncommon to find a belly full of babies when undertaking this type of case.

One that seems like it should belong in a horror film is the case of a parasite that is find in dogs. It is a giant kidney worm which wraps itself around the kidney and has been reported to ‘rear up’ at any pathologist it encounters.

Dr Spiro then wrapped up by taking questions from the participants and as you can imagine there were many.

He explained that in smaller routine cases there would be 2/3 staff participating, however in large animals such as a rhino there could be 30ish people. Heavy lifting equipment is required to position the animal and help with limb removal. There are usually 2-3 students who’s sole job is to change the PM40 blades as Rhino skin is 5cm thick and blunts a blade in a matter of minutes.

The lion post mortem showed a large spleen, is that a normal size for a lion?

The spleen size enlarges due to the high dose of barbiturates that are used to euthanize the animal. This is also why the meat cannot be distributed to other animals in the park.

Do you do your own cleaning?

YES! Dr Spiro and his colleagues clean up after every PM case. We could all use a pathologist like him!

Often the brain is removed if it is accessible. In some animals it is just not possible. In animals such as a Yak the skull is simply too thick and inaccessible due to the horns.

Are any of the animals subject to imaging?

Only a radiograph if something specific is suspected, not done routinely.

Do high risk post mortems exist and what risks are there?

The main high risk organisms to the pathologist are fungal spores, Rabies and Hepatitis B. There is a viral Herpes B present in Macaques which is 100% fatal in humans so this is what Dr Spiro is most concerned about.

Once the questions were finished (there was probably a lot more that people wanted to ask) it was fair to say that the participants were so grateful for him spending some time taking us into his fascinating role. We would love to see him at a future AEE event and especially hear more about his work with CSIP.