Fromelles- The Recovery and Identification of WW1 Servicemen

Fromelles, in Northern France, is a village 10 miles from the city of Lille and in 1916, during WW1, it was under German occupation. The village was the scene of a fierce battle on July 19th – 20th 1916 and saw Australian and British divisions fighting side by side.

The Battle of the Somme was raging some 50 miles to the South and Fromelles was intended partly as a diversion to the larger battle.

The Australian Memorial that now sits on what was once  the Fromelles ‘no mans land’ describes the battle as ‘the worst 24 hours in Australia’s entire history’. It was recorded that 5,533 Australian soldiers and 1,547 British soldiers were killed, wounded or taken prisoner.

Commonwealth War Graves Commission (CWGC) records suggest that between 19th and 21st July 1916 the Australian dead at Fromelles amounted to 1,780 and the British 503. Many of those killed could not be accounted for at the time.

Bavarian records suggest that many soldiers were killed after making it across enemy lines, into the German trenches. On the 22nd July 1916 records state the soldiers were buried in pits by German troops.

Most of the unmarked graves in this area of France were discovered by official post-war burial campaigns during the 1920s which then resulted in the soldiers’ re-interral in the now familiar CWGC cemeteries we see today.

Historians have long since speculated that there was an existence of unmarked forgotten graves near Fromelles and painstaking research by an Australian historian, Lambis Englezos, identified a site in a field at the edge of Pheasant Wood, Fromelles.

Lambis believed that these grave pits had been missed during the post-war burial campaigns.
After much pressure, put upon them, the Australian Government commissioned some work to be done on the site. Conclusive evidence of human remains was discovered on 29th May 2008 and six graves were partially exposed. Numerous small artefacts, e.g. uniform badges and buttons, suggested that the bodies were Australian and British.

Full military honours for the deceased

In July 2008 it was announced by the British and Australian Governments that all human remains would be exhumed and reburied with full military honours in individual plots at a new cemetery.
I first got involved in the project in November 2008 when invites for tender, for the excavation, were requested from several organisations. I was approached by an organisation called Oxford Archaeology to help them with their tender bid and was delighted when, in January 2009, they were commissioned to carry out this work.

CWGC requested my secondment from my position within the Mortuary Services of NHS Greater Glasgow & Clyde and I was delighted that approval was granted. After this it really was all hands on deck to get the project up and running and ready to go by the end of April 2009.

From a blank canvas to a temporary mortuary and lab facility 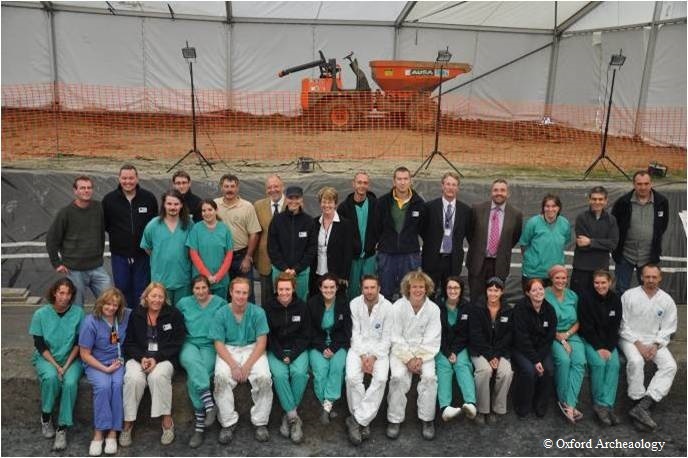 First task for me was a site visit. I was given a field as a blank canvas and asked to come up with a plan for a temporary mortuary and lab facility.

Very quickly site preparations were made with electricity and water run onto site. Hardcore roads were laid from main road down to edge of graves and also a hard standing area was laid for the temporary mortuary complex.

The buildings, which were ‘portacabin type’ structures were then delivered and set up ready for work beginning on 5th May 2009.

Traditional archaeology combined with the most up-to-date technology

Strict forensic protocols were put in place with the graves being treated as a crime scene.
The project would combine traditional archaeology practices with current disaster victim identification procedures. And so the process began with the graves being mechanically excavated until just above the predicted level of human remains then the heavy clay was removed by hand.
Every bit of clay was fingertip searched for anything of significance

Those working in the grave had to be in full protective clothing to minimise their DNA ‘drowning’ what little may have remained of the soldiers DNA. As soon as a set of human remains was exposed it was given a unique number, photographed and samples were taken for DNA analysis.
Strict continuity procedures were put in place. We had to be sure we could account for every item recovered from the burial site whether that be human remains or artefacts.

We were very lucky to have working with us a Scene of Crime Officer from Gwent Police. Body numbers, artefact numbers and sample numbers were allocated, by her, at the graveside and logged both in hard and electronic copies. The remains, field paperwork and any artefacts were signed over to the scene of crime officer, by the Archaeologist, using a chain of custody form and then she accompanied them to the mortuary ensuring continuity of evidence.

From that point onwards the remains and associated artefacts became my responsibility and I signed them over to the various stages within the mortuary. The remains were received at reception and booked into a database. From reception they went to X-ray. X-ray allowed us to pin point items of significance in what looked like big lumps of clay.

This information would eventually be compared to ante-mortem information collected from military and family records. Once the case was complete they were signed back to me and placed into long term storage.

Artefacts were signed over to an expert for specialist photographing, logging and preservation.
We recovered a large amount of artefacts which gave as a remarkable insight into life in the trenches but the one that sparked high emotions amongst the team members was a return train ticket Perth to Fremantle. Fremantle was the port in Australia that the soldiers sailed from and this lad didn’t get to use his return journey.

On the 3rd of September 2009 the last set of remains were received into the mortuary. A total of 250 men were recovered from the burial pits along with 6200 individual artefacts. Our anthropology lab completed the final analysis at end of October 2009 and the DNA lab in the UK completed their analysis of the remains in February 2010.

While we had been working at the graves and in the laboratory the CWGC was constructing a new cemetery – the first in 50 years. Reburial took place during the month of February 2010.

I was lucky enough to go back and assist with the burials ensuring continuity basically from ‘ground to grave’ At this stage all were buried, with full Military Honours, as ‘Unknown’ in order that each was afforded the same level of ceremony. The results of our investigations were reported to the Fromelles Identification Board which was commissioned to meet each year until 2014.

The Board Members were Australian and British Government appointees from military and subject matter experts who were overseen by independent legal advisors. The ID Board first sat in March 2010 and considered a variety of types of evidence including anthropological, archaeological, historical and DNA information.

On the 5th of July the Identification Board announced that 96 of the soldiers recovered from Pheasant Wood had been positively identified. For me personally the results were just unbelievable.
If we had got one name I would have been delighted but to have achieved 96 identifications, at that stage, was beyond anything I could have imagined. During the project we became very passionate about looking into ‘our boys’ records.

We read the letters written by fathers, mothers, wives, girlfriends searching for their lost men.
It was a very emotive project for everyone. The new cemetery was officially opened on the 94th anniversary of the battle of Fromelles on the 19th July 2010.
The Identification Board have met each year since.

We now have a total of 144 identified by name

In my day to day job I find myself working more and more with the bereaved. The driving force for me in ‘identifying the missing’ in any operation is the impact it has on those that are left behind not knowing where their loved one is or what happened to them. I return to Fromelles each year on the anniversary of the battle and attend the headstone dedication ceremony for any new identifications.

I have the opportunity to meet with the soldiers descendents and hear how much our efforts to identify mean to them even after all these years.

The stories of the missing men and boys have been passed down through the years and they have never been forgotten. I spent some time this year chatting with the family of Sergeant Jack Campbell and on their return to Australia I received an email from his nephew.

‘The day will be something I will remember forever. It is lovely to know there are still people in the world who care. On behalf of all our family I want to thank you and your friends for all the time and effort you have put in to finding Jack and all the other lost soldiers. You should be very proud to have been part of such great project’ Identifying the dead gives families the closure they deserve.