The HTA, Working together, building confidence: Conference for the post mortem sector

Sam Goss reports from the HTA Conference that was held in London on the 21st October. 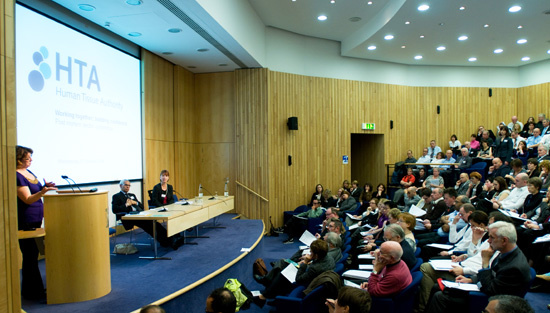 The Human Tissue act is probably the biggest legislative change to affect mortuary services over the past 50 years and has created division among those working in the post mortem sector. The conference day at the Royal College of Obstetricians and Gynaecologists went some way to resolve the issues the act has created.

A great deal of well delivered talks were given about various aspects of the act and how they have and will effect post mortem, mortuary and all other services associated with the post mortem sector.

The morning began with registration, a welcome and introduction from the Chair of the HTA, Shirley Harrison, in which we were informed that the Human Tissue Authority are still somewhat disturbed by the lack of progress made by the post mortem sector in comparison to other sectors under it’s jurisdiction and that this had been evidenced by  37 phase 2 inspections between 1st April 2008 and 31st March 2009. I believe that this came as a bit of a shock to the majority of the audience, as there seemed to be an immediate change in atmosphere within the lecture theatre. I believe this may have been due to the fact the audience consisted mainly of people in control or responsible for the delivery of post mortem services and of those the majority would have already been through the inspection process. What I mean by this, is that the audience were likely to have had a previous conception opposite to that of the HTA.

I include myself amongst this number as I have now been through the inspection process on two occasions and have been lucky enough to have had the knowledge to be compliant with the HT act for some time. This is due to a hugely supportive (and trusting) Consultant Pathologist team and in no small part, being a member of the Association of Anatomical Pathology Technologists. It was a bit of a shock to hear the above statement as it was contrary to how I feel about our profession. The work carried out by individuals, their Trusts and the professional body over the past few years has begun to change the way mortuary and post mortem services are delivered considerably. However, I do recognise that they will have seen the best and the worst of things across the profession and country and not necessarily be as lucky as I have, in the establishments they have visited or been involved with.

Although, for me, this seemed a bit of a shaky start to the day,  this was then balanced by the addition of the HTA’s opinion that “..the majority of PM establishments had a good understanding of the consent requirements of the HT Act..”  Human Tissue Authority, Summary of compliance 2008/09, regulating the post mortem sector , October 2009 and HTA conference introduction.

From this point on things began to look a little more positive. The Director of regulation, Dr Sandy Mather, took the stand and gave her presentation entitled “The road to excellence.”

This presentation laid out what the HTA see as the way forward for the sector which is the biggest sector regulated by them. There was mention of the recent media frenzy over the closure of Cardiff’s facilities and that this had caught the attention of all those involved with the management of post mortem services. It was said that this had a shock factor to the process of inspection and that this had made people most concerned about the style of regulation the HTA were using. Dr Mather went on to dispel any rumours and fears by ensuring the audience that the HTA were taking a stepwise approach to the regulatory action they take. This means that they will always provide advice and guidance and allow a period for change in an establishment that is in difficulty and only suspend a licence if or when an establishment does not react to the previous steps. Dr Mather pointed out that spot inspections are a reality and these are likely to be instigated by whistleblowers either from inside establishments or from members of the public. This is usually when there would be direct action from the authority.

I found this lecture very useful as it gave me a good and balanced view of the regulatory bodies position and how they will react when things are not up to standard.

As mentioned at the beginning of this document, having been through the inspection process on two different occasions for two different licences, I can say with confidence that their policies and procedures do indeed fit with the style in which they conduct themselves before, during and after inspections. 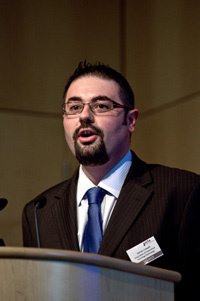 The other lecture I feel worthy of note from the morning is that of our Chair, James Lowell. It was a pleasure to see our professional body invited to a conference of this magnitude and James did a sterling job representing our profession in front of such a high level crowd. Even when a few difficult questions surrounding current practices were put his way, he was able to quote our professional standards linked into VRC to put down what I thought to be an attempt at discrediting our profession and it’s body, in a very straightforward and professional manner.

I believe that the progress our profession has made had been highlighted during this lecture and it certainly seemed to be well received by the audience. I have to say though, and sorry for this James, there was a lot of AAPT members there!

Which brings me to one of my closing points. When I left the conference, the table housing the CPD certificates was awash with AAPT accredited certs. They far outnumbered any other organisations amount and this just goes to show how far our association has come. It also shows the dedication of the APT staff who attended. Hopefully the sight of all those certificates heading the way of APT’s, hammered home to the last few in the crowd that APT’s are well down the road of improvement and are now a group that has a very strong national voice and highly skilled and dedicated members.

There were a number of different lectures in the afternoon but these were delivered to those who chose them so I feel that it would be too complex to list them here or go in to what their subjects were. I can say that ones I attended were extremely useful and gave me a few pointers on the things/changes I need to look out for as an APT and manager.

All the lecture power points  and the summary reports are available on the HTA website, the link to which I have inserted below:

If you were unable to attend this conference, I recommend you try next year as it was of high importance to our profession and an interesting and enjoyable day.