This was my first AAPT conference which I thoroughly enjoyed. The lectures were fantastic and very informative. The morning session was chaired by Steve Burr FAAPT who introduced all the speakers as follows;

Emer O’Toole introduced the new licensing standards for the post-mortem sector and discussed the HTAs revised codes of practice that are soon to be implemented after having gone through a consultation period and now awaiting to be passed in Parliament in Autumn 2016, with the codes hopefully implemented in April 2017. 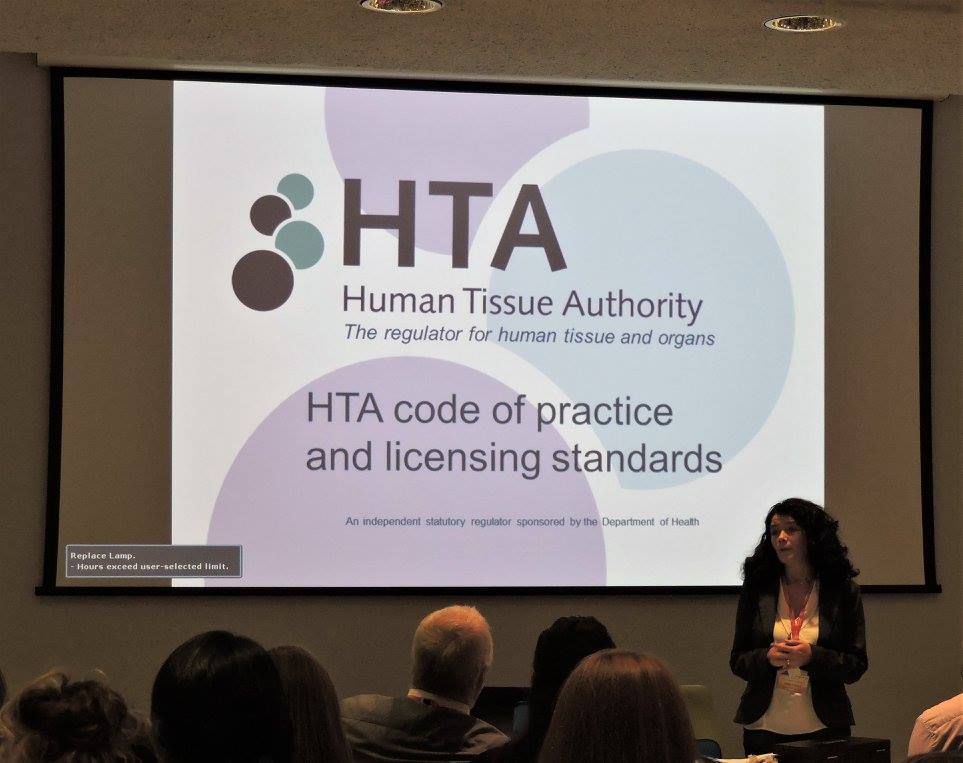 She gave us a very informative power point presentation.  She discussed in detail that at present there are 9 codes of practice which will soon be 7 codes of practice.  The 2 that are taken away will just be implemented within the others.

One of the new licensing standards that were discussed will be that any deceased that remains in a mortuary for more than 30 days will be required to be placed in frozen storage.

A benefit for all staff working within mortuaries is that there will be training days available soon with the HTA.

Dr S Thiagaraj discussed Fixion nails which I found interesting as I haven’t come across any as yet.

Fixion nails were first discovered in 1999 and they are used for stabilising long bone fractures.

The Fixion nails are inserted into the medullary canal in a reduced diameter and, once positioned, are expanded within the bone using pressurised saline solution.

The expansion enables the nail to adapt itself to the shape and diameter of the medullary canal for optimal rotational stability. 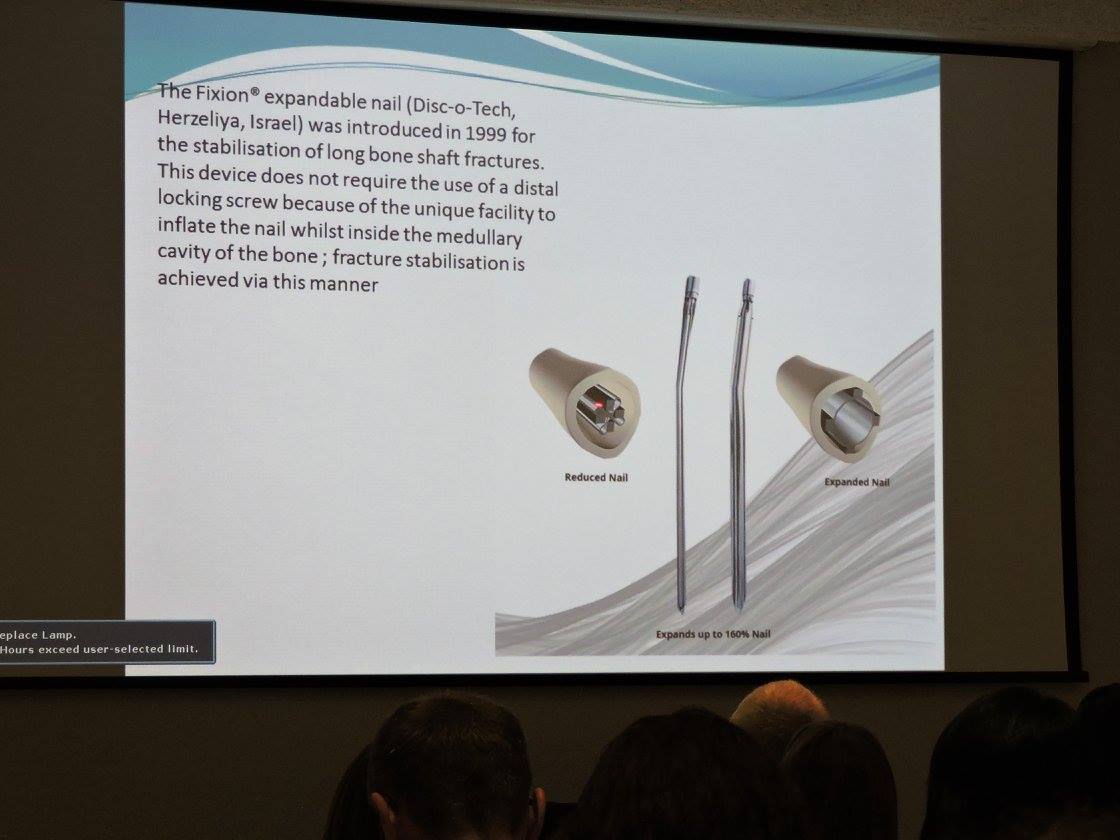 The surgical procedure is minimally evasive as there is not the requirement to screw the Fixion nail in place which means hopefully a quicker recovery time for the patient.

Although the procedure is not standard in the UK and less than 5% are used in operations, It was explained to the delegates that the nails are available in different lengths and we were advised how to find out if a Fixion nail has been used;

Prior to the deceased patient being cremated, the nail needs to be removed, Dr Thiagaraj explained the process that needed to be followed to do this;

The risk that the Fixion nail creates where a deceased is to be cremated is they are explosive under extreme heat and MUST be removed before cremation.

Dr Thiagaraj described an incident to the delegates when a Fixion Nail had not been removed prior to a cremation taking place and the explosion of the nail caused a large amount of damage to the inside of the cremator.

This was a very interesting presentation and I have gained a lot of information from it. 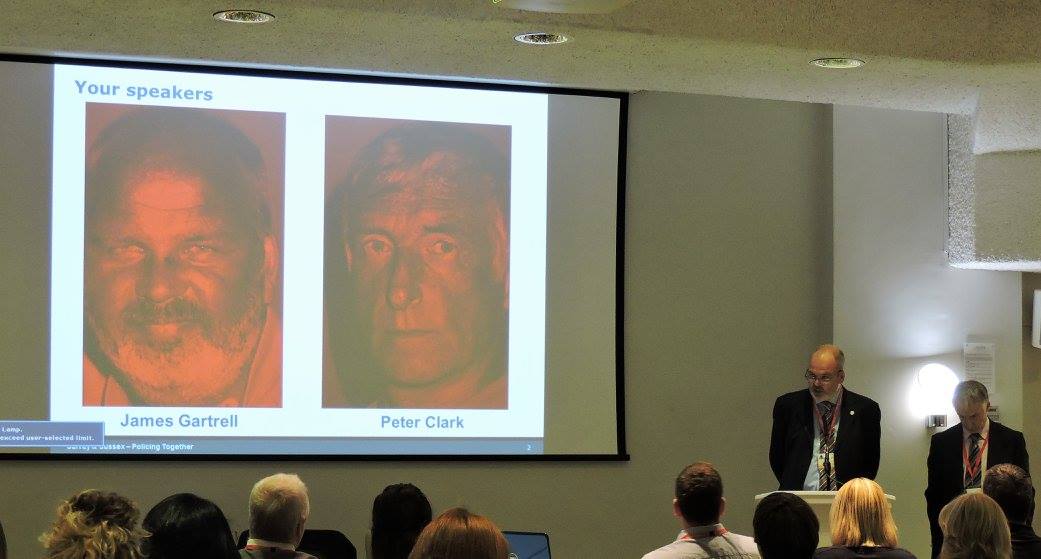 This talk was given by Peter Clark and James Gartrell who together have 50 years of crime scene photography.

They described how the melanocytes which produce melanin can be seen weeks later under the UV lights. Usually 4-6 weeks for adults and 10 days for children after the injury.

A camera is used that has been adapted for UV purposes, to absorb and transmit UV.

It was explained that the cameras “in the old days” were a bit hit and miss as to whether they would get a good photo or not.

They discussed a few of their experiences of the photography both on the living and deceased victims.

One of the cases was trying to distinguishing whether the bite marks on a child were from an adult or from another child.   The evidence eventually showed that these bite marks were in fact caused by another child all thanks to the photography skills that were used.

Another case they showed us was a footprint which under the naked eye was un see able but under the UV it was easily seen.

One of the techniques they explained was to get the best results when taking the photos of a deceased patient the best environment is in a darkened room and wearing dark clothing.

THE WORK OF A FAMILY LIASON OFFICER - GILL PILONI

Gill described a FLO as being a detective and investigator.  Their main purpose along with supporting families is to gather information in a sensitive manner which contributes to the police investigations action and preserve integrity.

FLOS are appointed in murders, road traffic incidents, missing people, manslaughter and mass fatalities and are also utilised abroad by being on call once a year.

During a DVI there are 3 different grades which are established by the information they receive.

She told us that the DVI phone line doesn’t open for 2-4 hours after the incident due to the fact that usually by that time people are able to get in contact with their relatives.

Grade 1 investigation will result in a FLO being deployed to support the family.

Odontology, DNA and fingerprints are also used for identification purposes.

Gill also talked about child deaths explaining the difficulty and challenges that the FLO’s face as there are so many different outcomes e.g. relying on forensic evidence and delay of results, and also the uncertainty,

Parents may never have an answer as the case may be inconclusive or ascertained.

Gill talked about a child case where the investigation was over a long period of time with a lot of uncertainty and confusion throughout the investigation which lasted, April 14 – March 15.  In any circumstance this would be very upsetting for a family although when a child is involved feelings are far more escalated.

An excellent morning session with very informative and helpful presentations – Thank you!