All entries were judged by novelist Alex Cochrane, Website Manager for the AAPT and IBMS.

Michael's winning entry is now available for all to see and will also be sent to Peter James himself. 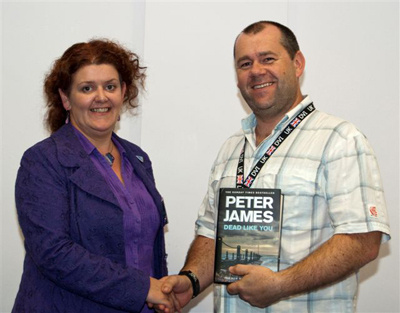 Damian a lovable rogue, at 51yrs old, large build leather clad with his belly hanging over his waistband, he has an on/off relationship with Cheryl a retired vice girl (49yrs) who has a teenage son who spends most of his time in trouble with the police.

He has 3 children, 2 boys and a girl from a previous marriage which ended 10yrs ago when his wife left him to live with her lesbian lover, luckily he has a good relationship with the children, but can’t abide his ex wife, the lazy sponging cow!

Damian lives by himself in rented accommodation on the outskirts of the town in a run down area where drugs and prostitution are the norm. He is very old school having worked at mortuaries in and around London where pathologists would attend and perform autopsies in their day clothes with a smoldering pipe drooping from their mouth. Domains days at work are drinking tea, smoking (heavily), sleeping when he gets the chance and assisting with autopsies of vagrants, prostitutes and the normal old folk who pass away in the derelict town, he also meets relatives (if any) and releasing bodies to the funeral directors.

Damian is a quite, private man who doesn’t have many interests out of work, although not the most intelligent person he does have a wealth of knowledge in motorbikes or anything motorised. His dream is to own a Harley Davidson, but could only afford one if taken out on credit which would never happen as he is terrible with money. Most of the money Damian earns is spent on beer cigarettes and his never ending array of tattoos which cover his arms and torso, from girlfriends names to decapitated bodies and sculls.

Looking at Damian people have an image of a hard biker with beer belly and hair falling down his back tied up with an elastic band, that they would never approach, but once you get to know him he is the lovable rogue who goes out of his way at work to make sure the deceased are well looked after whether a vagrant or royalty, it’s a shame he doesn’t look after his own health!