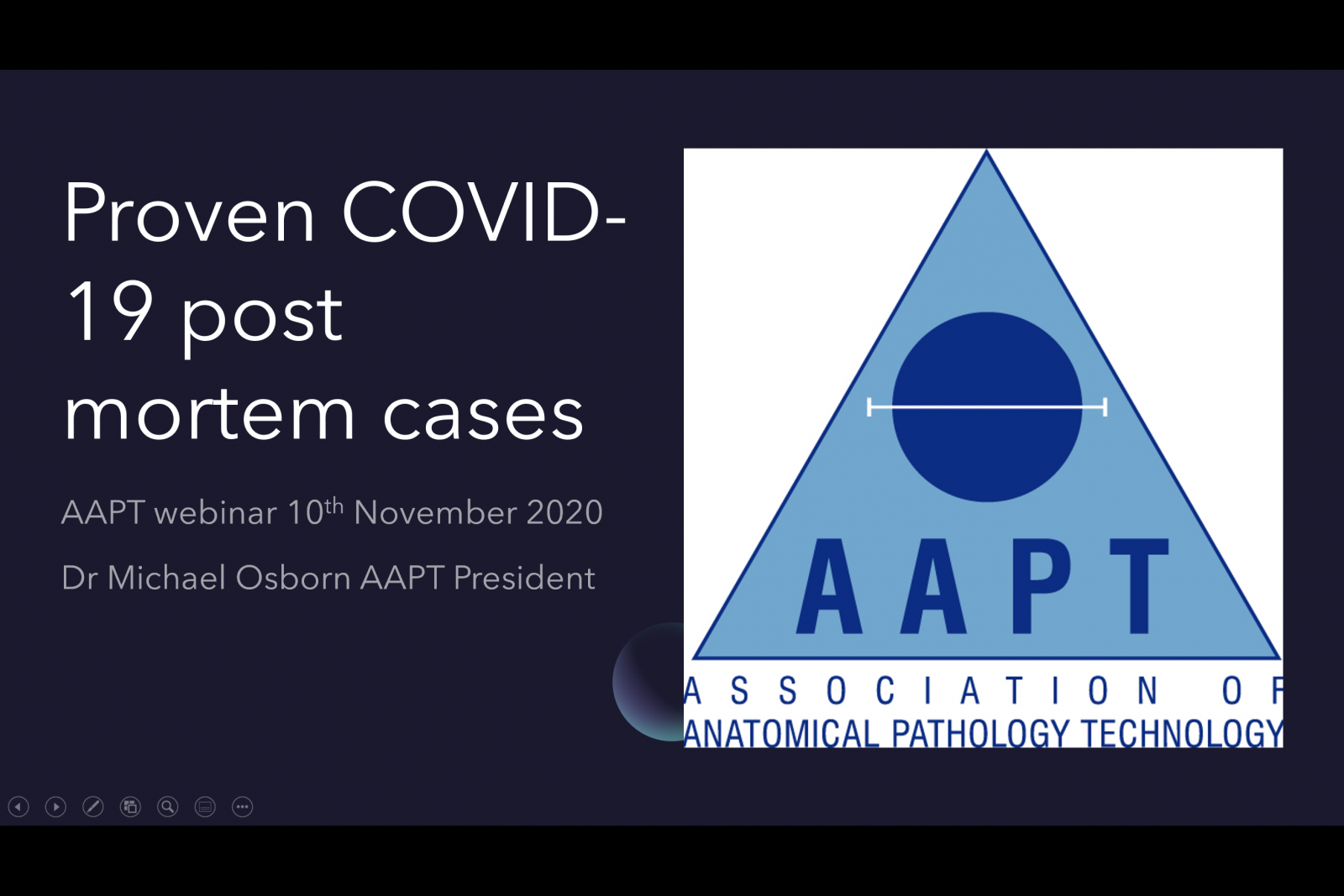 In what is fast becoming the new social distancing norm, I attended an online webinar given by Dr Mike Osborn regarding the findings in severe fatal Covid-19.

Working with a team which included Mortuary staff from Westminster Public Mortuary and biomedical scientists from Northwest London Pathology they undertook a study to identify findings in severe fatal Covid-19. In order to investigate the pathology present they performed nine fully consented hospital post mortems and one limited post mortem on patients who had tested positive for Covid -19.

It was decided that coroners post mortems would not be beneficial to their study due to the limitations on sampling amounts, length of time for consent to use tissue for research purposes and general limitations regarding post mortem purpose.

In order to be included in the study the patient had to have Covid-19 listed under part 1 on the MCCD, a pre-mortem diagnosis by PCR of SARS-CoV-2 and be over the age of 18. Exclusion factors included a post mortem interval being more than 10 days and SARS-CoV-2 being listed under part 2 of the MCCD.

10 families kindly gave permission for hospital consented post mortems on their relatives. Whilst this seems like a small study population, it is increasingly difficult to gain consent for these types of post mortems but every family that gave consent wanted to the death of their loved one to be helpful in some way. The benefit of a hospital consented post mortem meant that a large amount of tissue sampling could be undertaken and also used for further research.

In the 10 patients who underwent autopsy, hypertension and COPD were the most common co-morbidities that were identified as contributing factors on the MCCD. There were more male participants and more were from a BAME race than white. The age range of the patients was 22-97 years old with the median age being 73.

The main findings were unsurprisingly in the lung tissues. All 10 patients had diffuse alveolar damage (this is not specific to Covid-19 but as it can occur in any respiratory condition, but it was severe and everywhere). The lungs also showed petechial haemorrhages and there were micro thrombi blocking vessels. It was noted that the lungs looked more like liver under the microscope.

Immunological findings in both the spleen and lymph nodes supported T-cell depletion and haemophagocytosis.

There were also some unexpected findings which included pancreatitis, TB in one case, secondary infections in the lungs, cirrhosis and inflammatory changes in the liver and kidneys.

There was also evidence of active viral replication later in the disease course.

In one case there was a low viral load detected however, the patient had multiple areas of severe damage suggesting that the virus had already done the damage even though it was no longer in an active phase.

There are limitations within this study including a long interval between time of death and autopsy impaired some histological interpretation and post mortem endothelial stripping did affect the endothelial interpretation. There was also noted to be a risk of bias due to some religious groups perhaps being unwilling to give consent for a hospital post mortem.

The findings from this study support the role of autopsy in drawing clinicopathological correlations in Covid-19 and that the risk to staff members performing these post mortems is limited if appropriate precautions are observed. It was clear from this study that post mortem examinations have a significant role to play in understanding Covid-19 and its impact in order to support clinical practice and research

There were some interesting questions posted by attendees including whether pus could be found around the pituitary gland (as this had been observed in a post mortem during an unrelated case), however Dr Osborn explained that as Covid-19 is a viral infection not bacterial there would likely be no pus and this was more an incidental finding.

There was also a question posed as to whether there were plans to undertake the study series again during this ‘second wave’. Dr Osborn intimated that this series would be likely to be undertaken again and the staff from Guys and St Thomas’ were happy to support this work.

With the talk and questions all wrapped up the only thing left to do was thank Dr Osborn for taking the time to share this study and its findings with us. It was definitely insightful and provided a useful glimpse into the disease which is impacting so many of our lives in so many ways.