The sixth annual North West Mortuary Staff conference was hosted by Manchester at the Ramada Hotel at Salford Quays on November  3rd 2012. This was a free event for delegates and the response was excellent. The day provided a valuable opportunity to gather as a group of Anatomical Pathology Technologist both on a professional and social level.

The day was organised to introduce a number of professional speakers who shared their expertise and experience in their specialised field.  Also to  enable delegates to update and enhance their knowledge in legal, scientific and technical issues relating to Mortuary practice. 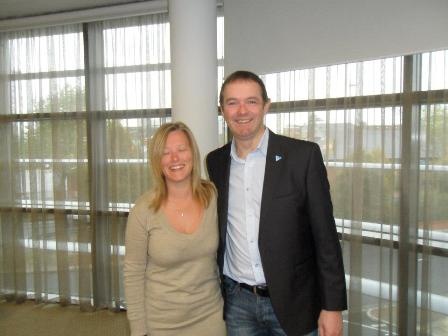 First speaker of the day was Julie Evans, Operations Director of ROAR Forensics who gave an excellent presentation entitled "Arsenic and Old Lace, Legal Highs" this highlighted how substances from Victorian times were still in use today and how we as Mortuary Technicians can detect and recognise the signs attributed to the taking of such substances.  Julie also explained how discontinued Pharmaceutical substances had been adapted and changed again once they had been made illegal to meet the demand of party goers over the decades to have enhanced energy levels. 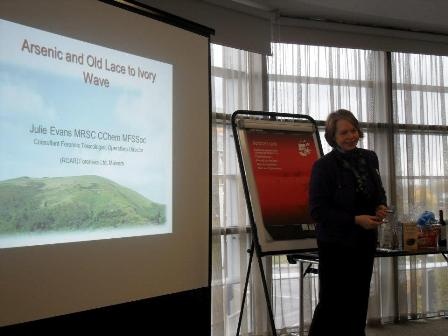 The importance of tissue donation

Christopher Laughton was the next to offer his presentation. Chris works for NHSBT and covered his important work in Tissue donation and Retrieval. He spoke about the consent procedure and how the tissue is processed and eventually used for donation. Chris also emphasised how important communication and our cooperation as Anatomical Pathology Technologists is to ensure his work is completed in a timely and effective manner.

Wendy Lewis - Cordwell  delivered a pertinent presentation on "Bereavement the forgotten service" which highlighted how the Mortuary service was not accredited as a major contributor in delivering Bereavement care within our Trusts. APTs are delivering Bereavement care to families on a daily basis with every death within the Trust  and the Community passing through our service. Also the issue was raised on what support we are offered as individuals and the availability of Bereavement support training. Are we a forgotten service? On reflection then maybe we are.

Following the final speaker of the morning session we broke for a hot and cold buffet style  lunch which was served in the hotel restaurant  which although I didn't have anything to eat myself I believe was delicious.  Delegates were then able to visit the selection of trade stands who had kindly supported the event. Live demonstrations were performed by some traders and freebies were plentiful.

Following lunch our next presentation was on Disaster Victim Identification which was delivered by Mike Conway (Chesterfield).  Mike had previously distributed application forms and DVI documentation to allow interaction with the delegates during his presentation. This involved him displaying various items of personal effects and then asking us to describe on the forms what we had seen. Lots of cross referencing between forms was necessary and it became apparent just how confusing this process could be.

Mike then described the  cramped conditions encountered while Working in various situations and the facilities available.  Mike then described the temporary Mortuary erected for dealing with the London bombings. He then reflected on the extreme methods used in identification for mass fatalities in Sri Lanka and other disaster hit countries around the world.

Dr Charlie Wilson (Forensic Pathologist) gave his presentation entitled "Concrete Thinking" this was a presentation on an unusual and bizarre murder case he had been involved with.  I won't go into any further detail other than to say, and I think I can speak for everyone, that it was totally brilliant from start to finish.

The presentation was dedicated to Paul Hyde a highly respected APT who sadly passed away earlier this year, a fitting tribute.

A trip down memory lane

Barry Knight who had previously delivered this presentation at the AAPT conference in Bristol was next to speak.  Barry took a trip down memory lane to where the APT role started 50 years ago. He explained how we originated as Mortuary porters who in effect were caretakers  for the deceased and not too highly thought of.  Barry described how the APT role has evolved over the years, the struggles we had to get recognition for the work we undertook and the poor pay structures attributed to our role. On reflection I feel our profession has come a long way from where we were 50 years ago, this is thanks to all the previous Mortuary Porters, Attendants and APTs who fought persistently to get us to where we are today.

Final speakers - John and Natalia from the AAPT

Our final speakers of the day were John Pitchers and Natalia Marshall who are both council members for the AAPT.  In contrast to the speech given by Barry their presentation was about the future role of the APT and how we need to embrace change to move on with our profession.

Natalia who has the role of supporting trainees undertaking the Certificate and Diploma courses in Anatomical Pathology Technology emphasised our obligation as  Managers and senior members of Mortuary staff in supporting and guiding our junior members and how important it is to spend time on completing the work book and not just signing everything off as had been previously stated. Natalia emphasised the changing attitude of the AAPT towards its trainees and with the added support given in the form of additional study days and the availability of the Trainee representative to always be there to answer any questions posed.

John followed on to explain the changes that were inevitable in moving towards none invasive Post Mortem procedures and how discussions and proposals were already taking place and how we as APTs needed to embrace these plans and get involved or risk losing out to other specialities. I don't ever see the invasive Post Mortem being replaced but In my opinion as APTs we can adapt to perform none invasive scans.  This can only enhance our role and give us more credibility enabling us to achieve a recognised registration status which has been denied previously. 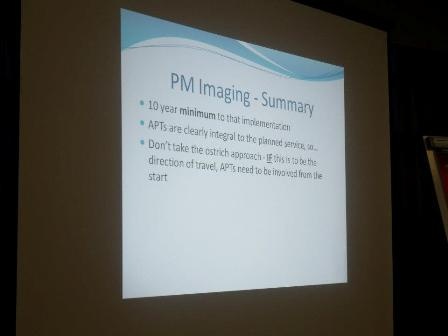 John showed a real passion in his work for the AAPT and I feel this came across to those who doubted the values and credibility of the AAPT. John interacted with the Delegates and answered questions confidently and professionally which from previous experiences I feel had been skirted around.

The AAPT is our national professional body and its members are an integral part of its survival.  I have great confidence in how the council are striving to move forward and support its members. This will result in a stronger membership and the realisation that we are here to stay and that our role as APTs is fundamental to the Pathology service.

The conference concluded with thanks from Michael Coombes given to everyone attending, speaking, supporting and for the organising of the conference with special thanks given to  Emma, Jackie, Linda, Natalia, and Craig.

The free raffle was then drawn followed by a secondary raffle where numerous prizes were won by the attendees.

A big thank you goes out to all the trade exhibitors; Barber Medical, Chemsol, Dodge, Dunlop, Flexmort, HCL Healthcare, LEEC, Pulse, Ulysses and ROAR Forensics who all supported us both financially and personally without which our conference could not have been the success I feel it was. Also thank you to Chemsol and Flexmort for their kind gesture at our post conference get together.

I must also say thank you to the AAPT for their help in the promotion of our conference on their website and subsequently the review of the days events. It shows their commitment to supporting our profession. They also attributed 7 CPD points to each delegate for the days attendance.

I now hand over to our Liverpool colleagues to host the 7th Annual conference in 2013 and am looking forward to another enjoyable day spent with fantastic people.