Report from Christian Burt, Secretary to the AAPT Council

It was encouraging that regional leads from South & South West, Scotland and the North East were in attendance in order to disseminate information presented to a local level. The results had been published openly and unedited and the next stage had been to extract the main points and other clear messages from the survey.

The Secretary of the AAPT Council, Christian Burt, gave an overview of the survey results.
It was noted that a healthy 184 technologists had taken time to complete the survey – a number that included 34 non-members. The Linkedin website indicates that 25-40% is considered a good survey return. With 150 members having taken part, the AAPT survey had generated 60%+ replies from membership and it was encouraging that people wish to have their say on future AAPT policy direction.

This was the first time the AAPT had directly surveyed, so in essence this direct contact was overdue for new ideas to be gathered and to encourage members to become actively involved in the many work streams that had been generated over the last 12-24 months. It was vital, therefore, that members endorsed AAPT policy in the three areas that were indicated in the survey replies as the most important: Education & Training, Regulation and Best Practice.

The last few years have seen very few members come forward for Council membership, and it was agreed this needed addressing if the AAPT is to achieve its goals, particularly in education, training and regulation. It was suggested that consideration also be given to changing the Council nomination process with the automatic membership to Council of regional leads.

It was agreed to be in the best interests of the profession that Council members should be VRC registered and it was essential that experienced technologist staff apply for voluntary registration & join Council as an encouragement to others.

It was agreed that regional events such as VRC workshops should be back on the agenda for 2012.

Conferences, events and the Student APT

The main message from the survey was that, at this stage, members did not wish to see the annual conference in collaboration with another professional group. Interestingly, however, the younger technologist respondents appear to be more open to a joint annual event.

Partnerships would, of course, continue regarding other national events such as the work with the Human Tissue Authority (HTA) and the taking of consent & also with appropriate stakeholders and end of life care concerns.

It was noted that the AAPT Council had already agreed to introduce cheaper rates for Student members at Conference – a number of respondents had indicated this was a good idea to encourage the next generation of members.

The Forum – a benefit of membership or a hindrance?

The replies had shown that forum discussion was not seen as a significant focus for the AAPT. Lately, however, the forum had benefited from the introduction of a dedicated group of members who will "forum watch" using their expertise to reply on professional and technical threads.

It was agreed by those present that the forum should be professional and no personal messages should be tolerated.

CPD had not featured highly in the survey replies, but was acknowledged as being a useful tool to keep APT staff up-to-date by attending topical meetings and through the on-line Read Test and Reflect (RTR) questions. It was agreed that AAPT members would benefit from a full on-line system of recording CPD activity, although of course this presented a potential financial burden for a small professional body.

It was agreed that a separate survey dedicated to the AAPT CPD scheme would be a good idea and would be discussed at the next Council meeting.

As Chair, James Lowell informed the audience that, although still in discussion, the AAPT had made 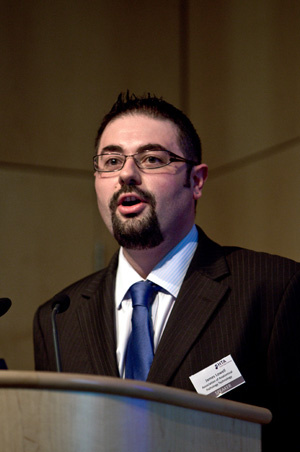 excellent progress in dialogue with the Department of Health. Education, training and regulation had been the fundamental cornerstones by which the AAPT had been founded back in 2003, and the Council had continued to provide a consistent non-reactionary message that technologists needed "better education & training and should be a regulated profession".

Whilst it would be foolish to not expect the unexpected, James reported that there was a near

"green light" to progress with a) an overhaul of the Certificate and Diploma qualifications and, subsequently, b) the introduction of a BSc in Anatomical Pathology Technology. As the NHS

represented the main employer, and these were practical qualifications, progress could only be made with Department of Health approval.

Revised certificate and diploma qualifications would have quantifiable educational currency, be delivered in a different way, be led by anatomical pathology technologists and robustly assessed.
To make this a reality, more technologists will be needed to give up their personal time to help their professional body and be actively involved with Council and working groups.

The AAPT continued to support the Voluntary Registration Council as this provided independent standards of proficiency and a shared code of conduct. It was, therefore, disappointing to note that "anatomical pathology technologist staff accounted for only 13% of all VRC registered practitioners".

It was reported that the current coalition government do not want to extend statutory regulation but increase voluntary regulation. James argued that the AAPT should be “leading the strategic VRC policy agenda” and APT staff would then be first professional group to be ready for any future governmental policy change in the future.

End thoughts from the Chair

James posed a number of questions for APT staff that can only be answered by their actions:
Are you to be porters or practitioners? Will you be regulated or simply "told off"? Do anatomical pathology technologists have a future to contribute to the healthcare science agenda or only invited out of politeness?

And most importantly: how much are you willing to do, how much do you care and are you prepared to help your professional body face the coming financial constraints?

Useful accompanying links to this article: